To start off with my first post, I want to share this trick I have known for some time. Back in Autodesk University (AU2012), I taught a class called "Unfold the Curtain! Think Outside the Curtain Wall Tool in Autodesk Revit", I showed a number of examples of how to trick out using the curtain wall tool. At the end of the presentation, I talked about an undocumented feature that was "new" since Revit 2012.
For many years, we are familar with using "Void" to make cutout in Revit, whether it is in project or family environment. However, you can never "touch" the curtain wall when it comes to making "void" within the system. Yes, you can edit profile or put empty panel within the wall to achieve certain desired shape, it will never allow the users to cut out part of the curtain mullion or make cut to customed curtain panels.
Ever since version 2012, you can use a "solid" from a family to cut out curtain wall system, this has become a great discovery for me. So now you can do something that looks like this... 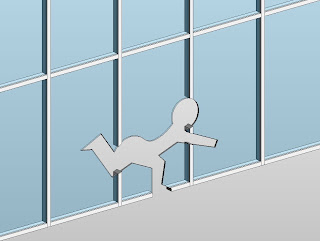 The concept is simple, I make a Generic family (it can be any category actually) as a solid (in this case, just a simple extrusion), let the family intercept the curtain wall, then use "Cut Geometry" to cut out the curtain panel. 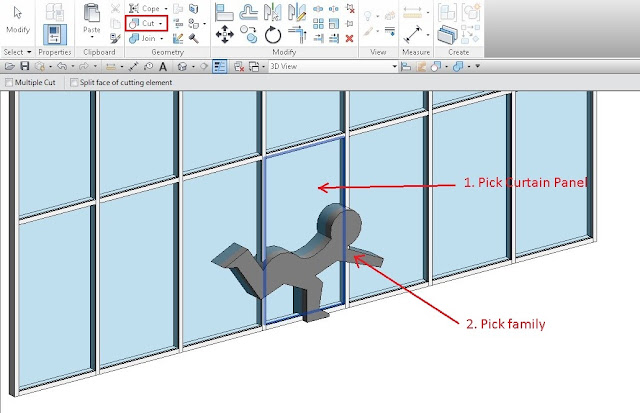 Once I made all the cut in the curtain wall, I have a yes/no parameter to control the visibility of the solid so that I can "turn off" the solid. As a result, it would appear that the curtain wall is cut out by a void. The good news is you can use the same family to make multiple cuts and it will work on the mullions as well.
So, the question is "Can we put it to a good use in a real project?" Recently, I have a project where we need to incorporate a lot of texts on a metal scrim system, the panels along with the design of the text are supposed to be fabricated with CNC machine. Since we built the metal scrim using curtain wall, using model text on the surface of the wall seems to be a decent solutions. Problem is in-place model text doesn't have the ability to cut out the curtain wall. Then I tried making a face-based family with just the model text and see if Revit will let me use the same trick on curtain panels. To make it more flexible, I even set up the parameter where I can change the text size, the depth as well as the text content.

Surprisingly, I was able to place this face based family hosted to the curtain panel and use cut geometry to cut them out. Because I have an instance parameter where I can edit the text, I can put different content and place it anywhere. 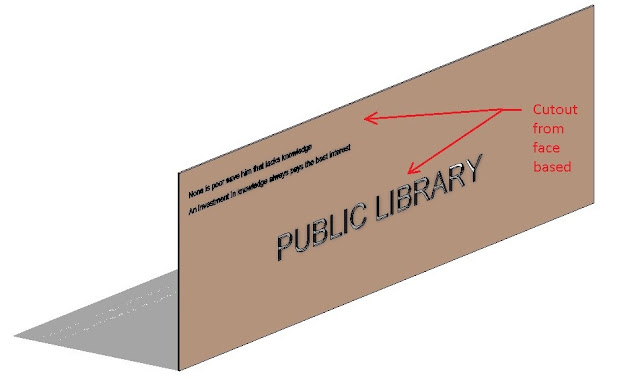 I can also use this trick on concrete panel (made by curtain wall), in this example, I have a parameter where I can control the depth of cutting the concrete. 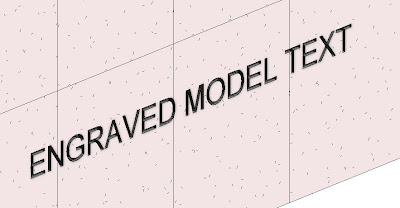 I hope this might offer another way of dealing with signage or text in Revit, especially if you need them to be part of the curtain wall design.
Stay tuned on the future post as I will show another way of using this soid cut trick on curtain wall.
Posted by phil-osophyinBIM at 1:06:00 AM
Email ThisBlogThis!Share to TwitterShare to FacebookShare to Pinterest
Labels: Curtain Wall, Tips and Tricks, Void Cut 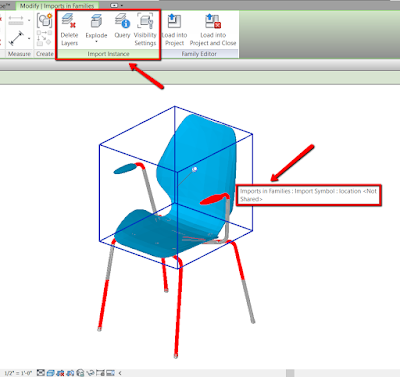